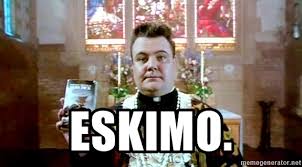 Poem of the day: It sort of reminds me of the futuristic Hawaiian dialect from cloud atlas.

What I did was generate a bunch of words via regex in Moby Dick, then find pair of letter frequencies and randomly inject them, and then find word pairs within words and add them to the end of lines. I would like to experiment more with stanzas here and punctuation.

I was chatting with Colin about my python poetic experiments and he said that had built a library a long time ago for rhyming based on espeak (the cool unix version of say).  So what is a phoneme? It is a unit of sound like p or th. When you want to rhyme it is useful to know the phonemes the of word endings.  There is also the  grapheme, that is a way of writing down a phoneme. I was thinking of sound when I generated my poem today. Chapter 3 is about tokenization and fileio and some encoding so it was somewhat useful in this endeavor.

I was really interested in finding frequencies of pairs of words. Here the frequency of ka is 40, of pa 1694 (in I think Moby Dick)).

Things get interesting when you load in a corpus like:

This is fun! Unfortunately this prints to sysout and not to a string, so I need to do some massaging in order to make this actually usable.. BUT

Stemmers is also introduced in ch3. This is how we determine the root of a word, like “go” for “going” there are different type of stemmers and you just have to use the one you like. That is sort of the advice that the documentation gives.  The WordNetLemmanizer returns the word if it is in its dictionary. So for example if go and not going is in the dictionary go is returned.  We looked at lemmas the other day, but lemmas, similar to stemming, remove inflections/endings to return the root word.

I am not sure how this would be interesting poetically.  Perhaps you want to create a rhythm, or use root words at different parts in a line – the endings perhaps.  For languages where words are not divided by spaces, tokenization is more difficult. The analysis of segmentation addresses this and is fascinating. Basically word endings are demarcated by binary strings (1 being end of a word).  One idea is remove spaces from sections of moby dick and reconstitute them based on distribution of word length and sentence length.

Sumana posted this fantastic python library, olipy,  for this sort of poetic generation.  Oulipo is a writing style where you introduce certain constraints into the writing, like writing without the letter e. Christian Bok is one of my favorite oulipo-esque writers.  Look what happens when I google for an article on Bok and Oulipo… an article on Bok Oulipo and Bergvall come up– that my friends is synchronicity – maybe.